Marienne writes poems about the farm that can be beautiful, funny and moving.
Jerry writes some that are mostly silly.

There’s a cougar on our farm.
We know by its screaming,
Like it’s in heat,
Like an old women dying horribly.
“Be careful” says a friend,
“Count your calves.
Carry your pistol in the pasture.
They go for the neck.”
Well, by the time it’s decided
To go for my neck
This rigged fight is already over,
Pistol or not. 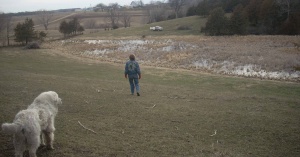 I ride the current of the fence
and shoot around a hundred acres
in the winkin’ of an eye,
humming through emerald pastures,
between fields of oats and corn,
where milkweed splits the dry cocoon.
her parachutes sail rip tide winds.

I surge past juniper and oak,
where red squirrels spring from tree to tree
and deer leave chiseled prints
where they nibbled yesterday.
with weasels gone, grey fox remain,
and coyotes do their best to outsmart wily hunters.

I arc over loam of fields fresh-ploughed
with names like Lester, Glencoe, Storden:
a legacy of prairie grass and giant oaks
composted into velvet black
that reaches way down deep,
where moles and gophers burrow in,
escaping traps and high strung dogs.

I charge through banks of velvet leaf,
thistle, burdock, foxtail, fern,
past pulsing fireflies in the marsh,
where muskrats swim unseen
and wood ducks quack and flap
to guard their tender young.

I parallel the ‘crick’ that trickles to the ‘Crow’
that longs to join the Mississippi,
past bloodroot and violets,
(where ginseng used to grow
and Indian mounds are rumored to have been.)

I circuit cow paths that twist and turn
like aged, lazy rivers
to end up where I started.

the steward farmer is my father;

he knows the rise in every field,
the depth of every gully,
exacting where the gooseberry and wild asparagus grow.
soil in his pockets, on his hands, and, no doubt, in his soul.

he has lived here every season he has known;
has hardened, softened,
birthed and laughed,
laid loved ones in the ground,
and risen every morning to a call that he has answered.
considers the handiwork of God;
the splendour of his brief possession
(and like his body, just on loan.)
I see roots grow from his feet
to nourish man and land,

and I come here, again,
to let myself be, like him,
so deeply planted.
©2002 Mariénne Kreitlow

(Mariénne doesn’t like it when I offer explanations of her poems, but I’m going to do it anyway.  The renderer comes when you have a dead animal – in this case a steer – that can’t be butchered, in a truck often piled high with animals he’s picked up from other farms.  He is commonly called the knacker man, and serves an indispensable purpose in farm country.)

big truck roars up our road
smack dab so fast
right in our drive
october day
but like july
taken by surprise
emily rose and I
big truck
a big box
a way way big box
kicks up a cloud of thick-ick dust
has a wench a crane a boom a chain
legs with hooves against the sky
blue sky
piled high piled high
they must be piled high inside
shapely black and white with hooves
bobbling with the rutted road
the road the ruts
the dance of death
piled high against blue sky
ruddy faced driver
bounds out calling
am i in the right spot?
right spot?
dead steer?
not here
oh, next place next place east
a cheerful voice
a cheerful man
our nostrils filled
so filled
so strong
hangs on so long
we watch the legs wave goodbye
another cloud of dust of dust
a roar they’re gone
whistles as he drives on down on down
bless the vultures
bless the buzzards
bless the cheerful knacker man

Excerpt from a Stewardship Talk that Jerry gave at our church in October, 2017

Our farm does not have a mortgage. Thanks to the excellent stewardship of Willard Kreitlow, my father-in-law, the farm hasn’t had one in decades. We don’t have a mortgage, but we do have a loan.

God has loaned us the land, and asked us to take care of it for Him. And it’s an odd kind of loan: he doesn’t want us to pay Him back. Instead, He wants us to pay it forward. Just as my wife, Marienne’s, ancestors paid it forward to Willard’s parents, and they to him, and he is paying it forward to us, we are planning to pay it forward to another generation who will continue to care for the land with the same conservation and sustainability ethic that we hold dear.

So, what do we get out of this? We get a very interesting and adventurous way to make a living. We get to live on God’s land. And we get to see the Land Lord everyday. If I may take a little liberty with one of my favorite old hymns – and I do love those old hymns:

“This is my Father’s world, He shines in all that’s here;
In the pasture grass I hear him pass: He speaks to me everywhere.”

Come to bed, my love.
Sink with me into blankets and slumber.
As cows in the barn press against one another
steam from their nostrils freezes and shatters.
They ruminate, dreaming of infinite stomachs
and the 4-step they’ll frolic upon summer’s lawn.
We spoon and nestle, naked chest curved to spine.
I hear goose feathers singing, winging the down
my grandmother plucked, stuffed, stitched into muslin
for a night such as this, both cruel and tender.

Jerry wrote the next one in our first summer here, when we had spring flooding and one of the worst bug seasons ever.

Ten minutes from stalk to pot;
hungry gnawing in my gut.
Steaming cob on my plate,
and more butter than I ate
all last month.
And salt, salt, salt.
Two meals a day, freeze the rest.
Mosquitoes and the deerflies,
floods and heat –
all forgotten
when sweetcorn I eat.

TRAGIC LOSS OF FREDERIQUE
by Marienne

Frederique the Mouse had such high hopes, such big dreams for a little mousling.

I must say that I feel rather responsible for his death, something that I am not at all emotionally prepared for. I should have warned him about the hazards, but it’s too late now, isn’t it?
He stole two toothpicks which he obviously schemed to use for poles, but I must say I’m not in the habit of counting my toothpicks, so I really had no clue. I mean, it’s all too absurd, isn’t it?
I had been rather cross with him lately as he’d been prone to sneaking into my dresser drawer and gnawing on some rather personal, dare I say intimate, items of mine. But when a curse escaped my lips, well I didn’t mean it literally.
I suppose when he was squeaking out an immensely annoying high pitched song in the middle of the night I dismissed it as a rather weird dream, perhaps the effect of too much rhubarb sauce and créme brulée before bedtime.
But strangely, I can still hear that song in my head, kind of like Bruce Springstein on helium:
“I’m going to ski beneathe the moon when fahrenheit is zero. I’m going to ski beneathe the moon just as it eclipses. I’m going to strap on razor blades ‘cause I’m a bad-assed mousey. I’ll fly down the highest peak and screech my battle cry! Ahh! Ahh! Ahh! Screech my battle cry!”
In hindsight I should have thrown out the double edged razor blades long ago, instead of sticking them in the corner of my drawer.
This morning, after the horror of finding his tiny frozen body I located bits of paraphernalia down the slope. I wish I could say he died with a smile on his rodential lips, but he just looked freaked out to me.
Frederique wasn’t a Christian, but I said a prayer and created a tiny altar to honor him. I reverently placed one of his “ski poles” and a rusty, bloody razor on an antique wooden mouse trap. It looks nice.
And, somehow, this picture makes me smile.

We bought the trellis when we were flush.

Fancy; copper filigree.
We took it home in pieces,
it sat dismembered in the shed,
gathering flyspecks, spider eggs.
Finally you hauled it out,
placing it here, there –
until we agreed upon the perfect spot.
So you levelled the ground,
laid a bed of moist concrete.
Spent hours doing it right, bolting it down.
A gateway for a future orchard
that we planted just last year.

It’s not like those garden magazines
where everything is trimmed and ripe,
and the gardener is a flush-cheeked Brit,
or a southern belle about juleps and her mama’s pie.
Ours teems with box elder bugs, asian lady beetles,
and ick-once maggot flies.
Yet in a single summers time
morning glories bloom and circle overhead
and robins vie for the highest spire.

I stand in the arc of my ragtag paradise
where we harvested eighteen apples – made into four fragrant pies –
and elderberries – enough to keep away the winter flu.

TO GARLIC UNDER SNOW
by Jerry Ford, 2009

The garlic is underground, chthonic,

like some seething cell of radicals,
insinuating deep roots,
waiting for the perfect moment to riot.
Put your ear to the groundswell,
eavesdropping, and hear snatches of incendiary phrases:
“Pesto,” “Pasta” “Salsa,”
“When do we strike?”
Not today,
snow still sequesters the soil,
as cloves bide their time.

The Zinger Stinger
by Marienne

Ah! My sweet mosquitoes, singing, swarming.
Welcome home.
I offer you my succulence, my tender flesh, eyelid and thigh.
Stiffen thy proboscis. Enter swiftly, do.
Commence your feasting during these days of summer love

I will write thee poems upon my bedroom walls,in blood (if there be any left)
as I convulse,
and writhe,
and die,
and itch for all eternity.